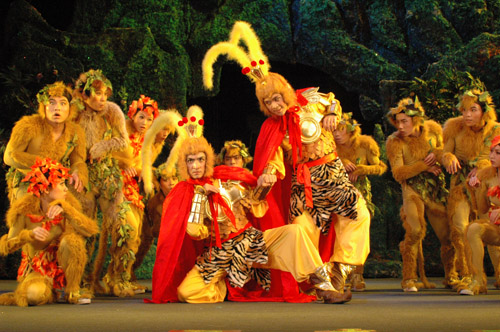 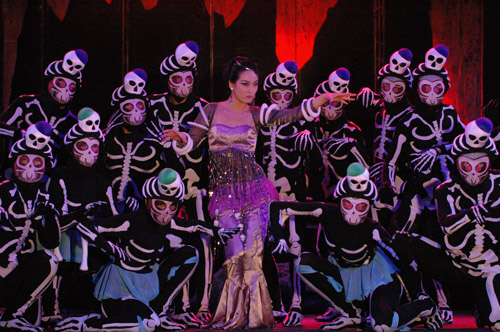 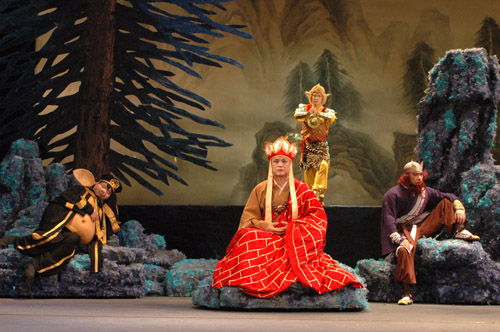 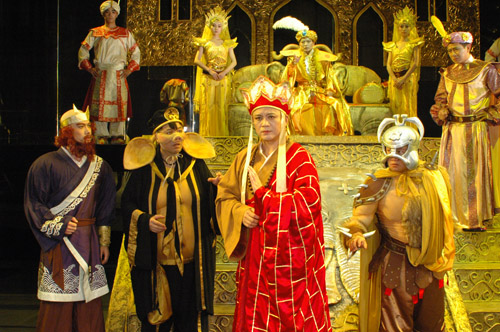 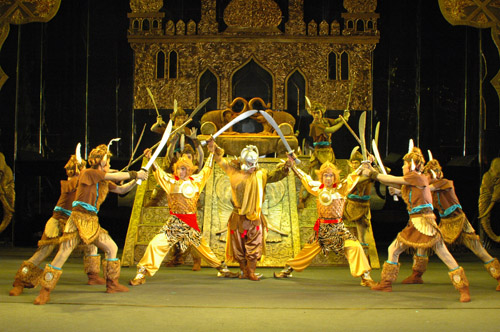 It was said that the flesh of Tang Seng would bring eternal youth. Therefore, when four monks arrived at the White Tiger Mountain, Skeleton Demon incarnated as three different persons to trap Tang Seng. Monkey King vanquished Skeleton Demon for each time, but was condemned byTang Seng as killing innocents. Annoyed by Monkey King’s defense, Tang Seng believed the slander from Pigsy, who bore a grudge against Monkey King. Monkey King was then expelled from the team returned to his mountain, only to find that lair was occupied by false Monkey King. Pigsy considered himself as the senior disciple of Tang Seng but nearly made Tang Seng lose his life. Not knowing what to do, he had to invite Monkey King back but came across the two Monkey Kings. After a series of fierce conflicts, the capable Monkey King defeated demons saved Tang Seng, then the four monks continued their journey to the West.

This play is adapted from Journey to the West, one of the four greatest novels of Chinese classical literature. It is the first stage series on the stage of Chinese drama child play.

The stage presentation of this play integrates music, dance, kung fu lines into a whole. Combining singing, chanting, acting, acrobatic fighting can be described as complete in every line. It is a brand-new type of myth play which creates a novel dreamlike mood. The play is not only pleasurable for young children to watch, but also able to meet the aesthetic needs of the parents bringing their children to the theatre.

It also contains hip-pop designed in accordance to movements of a monkey raps with strong sence of tempo. In this way, Monkey King‘s free personality, his love of freedom his omnipotence are depicted vividly. This drama has been elected as “State-level Fine Stage Arts with Government Funds, 2009-2010”. It won Award of National Theatre Culture Gold Lion for Children’s Drama (2007-2010)