Invited by the Committee of Bucharest International Anime Theatre Festival (BIATF) and Tandarica Animation Theatre of Romania, from Novermber 7 to Novermber 15, the cast and crew of Three Little Pigs led by Vice-chairman Lei Xining of China National Theatre for Children (CNTC) participated the 11th BIATF, giving 5 runs of Three little Pigs. It is a significant beginning for the for the first show of China‘s children drama in the Eastern Europe. 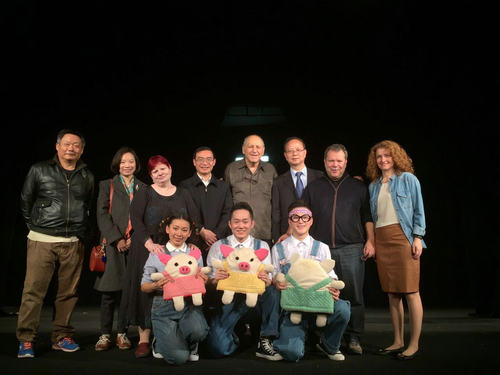 Lei Xining ,The Vice-Chairman of CNTC；Yan Jiangwu ,Cultural Counselor of China Embassy in Romania Yan Jiangwu, and Mr. Calin Macanu, the Manager of Tandarica Animation Theatre with actors and actress and other theatre stuffs.

The 11th BIATF invited 30 dramas from 8 countries of China, Belgium, Spain and Poland,ect. Three Little Pigs is the only Chinese children drama invited by the BIATF, which also gained much recognition and praise from Romanian drama artists, international juages and audience. There were nearly 1200 Romanian children from 5 schools watching the drama shows. The English lines, serving as an audience-friendly innovation, was a brand new way to breake language barrier. The Counselor Mr. Yan congratulated to all cast of their successful performance, and said: “The performance is a big success. I never think the Romannian children could love this chinese classical drama. I am proud of you. Congratulations! The English lines make the performance easy to understand, which is worthy form to promote to more countries. ”Mr. Calin Macanu also planed to introduce Three Little Pigs to other European countries. 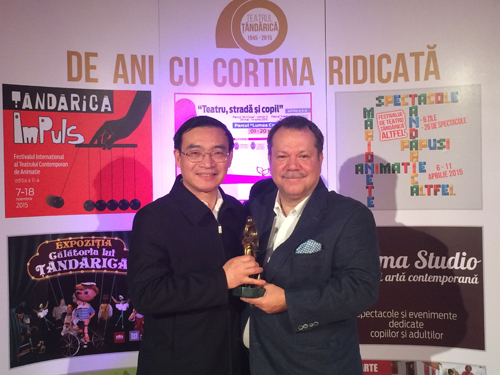 Since February 2015, CNTC and Tandarica Animation Theatre has signed a 5-year strategic cooperation agreement, confirming the “3-step”strategy---communication for understanding, exchange performance for influnce and complementary advantages for joint creation. This performance is the practice of step 2. The next year, Three Monks will go to Romania, starting a new chapter of deeper bilateral communication. Besides, a bunch of feasible and creative idea of new dramas created bilaterally has been on the way.