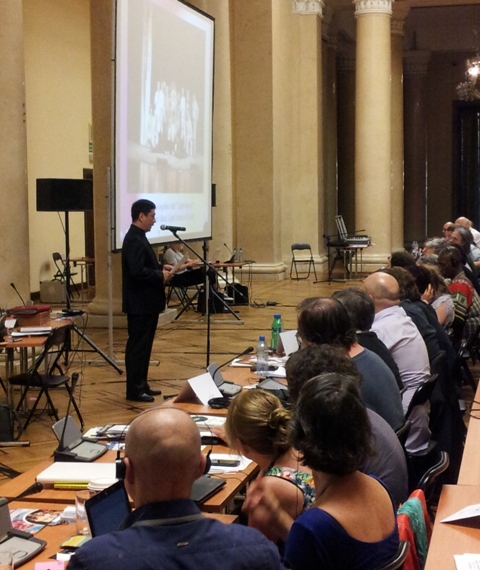 It&rsquo;s a great honor to participate in the meeting on behalf of ASSITEJ China center. This honor comes from the sincere entrust of over 20 member units of China Children&rsquo;s Drama Society which belongs to ASSITEJ China. So I am not standing here on my own. This honor also gives me an opportunity to represent Chinese artists who engaged in drama development for young audiences, to express our fervent expectation on strengthening international communication and cooperation of children&rsquo;s drama.

China is a populous country, with more than 380 million children and teens. As the ASSITEJ China center, China Children&rsquo;s Drama Society is an art organization united all China children&rsquo;s art troupes together to serve children and teenagers, as well as the institution which serves the most people in the world. “All for Children” is the permanent pursuit of China Children&rsquo;s Drama Society. China National Theatre for Children always takes it as our own duty to promote artistic enlightenment for children and teenagers. We are trying to inspire the intelligence of children, helping them pursue colorful dreams and enjoy art pleasure through producing various dramas and promoting colorful art activities. Our performance footprints were left in lot of cities, villages, schools and kindergartens all over China.

China Children&rsquo;s Drama Society, as a member of ASSITEJ, always strives to carry forward the international communication and cooperation while unity and facilitate mutual study and communication among domestic art groups. In 2011, we established “China Children&rsquo;s Theatre Festival”, which has been successfully held three periods since then, with more than 75 art groups from domestic and abroad had participated in performances and communication activities, and over 100 plays competed with each other, nearly 500 thousand audiences enjoyed these wonderful performances. The festival has become an active role in enhancing children&rsquo;s drama communication between China and foreign countries, as well as enriching Chinese children and teenagers&rsquo; cultural life.

With the constant deepening of China&rsquo;s reform and opening up, we are not only attaching importance to “Step Out”, namely introducing outstanding Chinese drama works to the world, making all children share art pleasure; but also paying attention to “Come in”, bringing excellent drama works from abroad into China, or inviting theatre counterparts of foreign countries to cooperate with us to create dramas integrated the essence of both Chinese and western culture.

Although it is not a very long time since China joins ASSITEJ, but we have fully felt the warmness of this international family, and shared many great experience and achievements through the platform. In this organization, all members respect each other, exchange equally, learn from each other and jointly promote the development of children and teenagers&rsquo; drama all over the world.

Teenagers are the future of world. It is our responsibility to cultivate them to enjoy, appreciate and create beauty with drama and guide them to embrace the world with beautiful hearts. Therefore, the career we have engaged in will be holy and glorious.

If I am elected as an executive committee member, I will do my best to undertake all responsibilities and obligations that ASSITEJ confers to me, and to promote more international communication and cooperation on children and teenagers&rsquo; drama by taking advantage of the open and broad stage of China. Also, I will find a better way to integrate the concepts of ASSITEJ with the development path of China children&rsquo;s drama.

In another month time, the fourth “China Children&rsquo;s Theatre Festival” will be held in Beijing, here on behalf of the Festival Organization Committee, I sincerely welcome theatre practitioners all over the world to China, to appreciate the grand art event and enjoy the children&rsquo;s happy holiday in China with us.

Thank you very much!