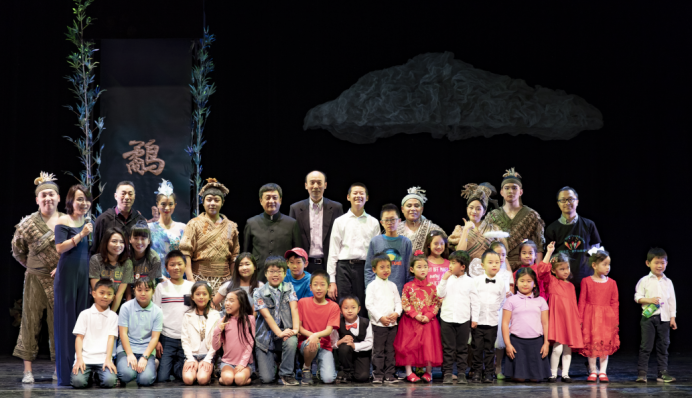 The cultural counselor of the Chinese Consulate General in San Francisco Deyu Zhai,  President of the Love & Flash Foundation of the United States Ping Luo President of China National Theatre for Children (CNTC) Yin Xiaodong took group photos with the crew and young audience on the spot.

At the invitation of Love&Flash foundation, approved by the Ministry of Culture Tourism, 15 members of the crew of "Snipe & Clam & Fish" of CNTC went to make 3 performances in San Francisco, USA for the first time from October 31 to November 5, 2019 led by the CNTC President  Yin Xiaodong.  It showed rich Chinese cultural elements from the aspects of story, stage design, music, costumes forms in the performance, which were warmly welcomed by the audience in the bay district. On the afternoon evening of November 2, local time in San Francisco, CNTC Drama "Snipe & Clam & Fish"played in the Campbell Heritage Theater in San Francisco for 2 consecutive performances. All the 800 seats of the theater were packed the atmosphere at the scene was very warm. The first performance of "Snipe & Clam & Fish"in the United States obtained a great success attracted numerous fans.

On the afternoon of Nov. 3, the crew of"Snipe & Clam & Fish" held a Creation class for for more than 300 audiences in San Francisco at the Campbell Heritage Theater, which contained drama appreciation, performance guidance, improvisation, Dance experience interaction.