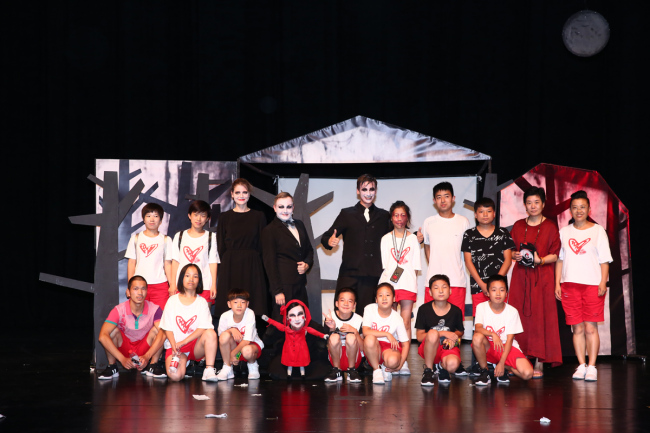 International theatremakers young Chinese performers gather for a picture after a drama "The Little Red Riding Hood" shown at the China National Theatre for Children in August 2018.[Photo provided to China Plus]

Hundreds of professional theatre makers from around the world recently gathered in Beijing to explore ways to develop dramas that suits the needs of young audience.

The International Association of Theatre for Children Young People recently hosted its annual gathering in Beijing.

It is the first time in the association's 53-year history that it has organized a gathering in China.

Louis Valente from Denmark is the secretary general of the association, which is dedicated to the artistic, cultural, educational rights of children young people across the globe.

"I mostly look forward to actually the encounter with Chinese artist international delegates, because we work in very different national setting institutions. Cultural encounter is that what I'm most looking forward to."

Thomas Joseph Maguire is a researcher of traditional Chinese arts at a British university. He is a member of the delegation coming for this year's gathering in Beijing. He said that the gathering provides an opportunity for the participants to have an authentic cultural experience.

"One of the things is that it allows children to experience another culture quite directly. It means we are also dealing with cultures as they are rather than a globalized product that is the same for everybody. So we can encounter each other in our authentic way the way it makes sense. also because both the practitioners audience then have a chance to engage, when we're not just on stage but what happens around the stage whether we are at workshops or talks, we're learning together. So U.K. artists, working with the Chinese audience, have to adjust, that's a good way of learning about that audience about that culture. We shouldn't all be the same, so it's learning to tailor ourselves to be together."

At the Beijing gathering there have been more than 50 performances of 18 productions from countries as diverse as China, South Korea, Israel, South Africa, Norway.

As well as provided a life-enriching experience for many Chinese children over their summer holiday, the event's international performers have had their own unique experience in Beijing.

16-year old Maya Lucas has been acting with the Children's Theater of Charlotte for the last eight years. She recently toured China with her fellow performers, put on a show for the International Association's gathering.

Her mother Dorothy Davis accompanied her on her China trip.

"I'm happy that Maya gets to come to another country that she's never been to before meet people from all over the world, to be able to work in another culture to just exchange ideas with everyone see just how closely we are related we all are; that everybody is basically the same, we all want the same thing out of life so it's just happy a good time to be able to meet new people to build more relationships across the world."

Countries around the world all have their own unique theatre culture.

Many Western countries, including Denmark Germany, incorporate a broad range of subjects into theatre performances, including difficult topics such as abuse divorce. Theatre makers find ways of adapting these topics for a young audience.

But topics such as these are scarcely seen in Chinese children's threate.

Yvette Hardie, the president of the theatre association, thinks the gathering is a valuable opportunity for participants to develop a better understanding of Chinese cultural traditions.

"Every culture is obviously different has its own forms of expression. what we've seen is in China, there's a real sense of formality dignity. there's also a wonderful sense of celebration: lots of color the productions are very colorful, very vibrant very engaging for the children. I think that's for many people within the ASSITEJ community, this is their first visit to China. So for them, it's a full cultural explosion something just very new for them." 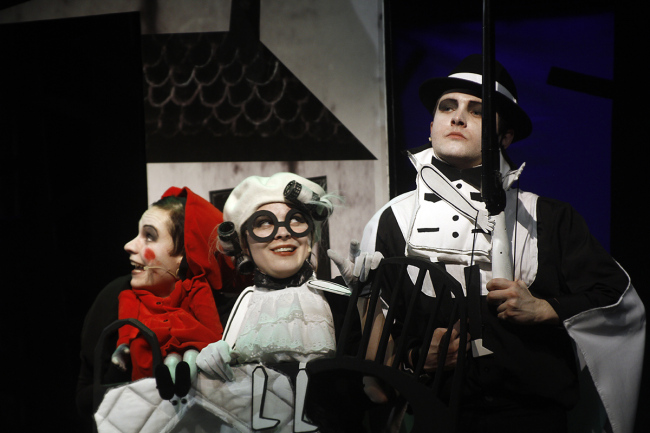 International performing artists give a drama show "The Little Red Riding Hood" at the China National Theatre for Children in August 2018.[Photo provided to China Plus]

Although cultural traditions vary, international theatre makers all share the same goal of finding ways of making works that are tailored to meet the needs of their young audiences.

"What's happening that is really exciting at the moment for the future is about children being participants in the works that they created. Instead of watching a piece of theatre, they might be inside the action; they might be touching, they might be feeling smelling it, so, that changes their experience. That's one of the most exciting ways that children theatre in Australia is really shifting the way the children experience that."

She thinks that while they can learn from their western counterparts, Chinese theatre makers also need to explore the unique aesthetic characteristics of their own culture.

"It's impossible to split East from West or vice versa in theatre making since communication dialogue are both well-developed today. However, how should we, as theatre makers, showcase for young children the best parts of Chinese culture? Chinese children shouldn't forget their ancestors the origins of Chinese culture. Meanwhile, international theatre makers want the child audiences to gain a new outlook on the world. Whether one's opinion is right or wrong is not important. I heard that for some of the international theatre makers, it's their first visit to China. I believe that this type of exchange is necessary, a helpful brainstorming process."

as Yvette Hardie, the president of the International Association of Theatre for Children Young People, explains, this brainstorming process is expected to exert a positive impact on the young audiences.

"For me, it's probably one of the important things for child to experience. It's also the one space where child can really start to learn about: what does it mean to be someone else. What does it mean to be someone who's not living in my experience? that capacity for empathy is what we need in the world today more than anything else. So I think that theatre has a very big role to play in the development of children."

The theatre association is calling on more Asian theatre artists to take part in their organization, ahead of their next artistic gathering in 2020 in Tokyo.