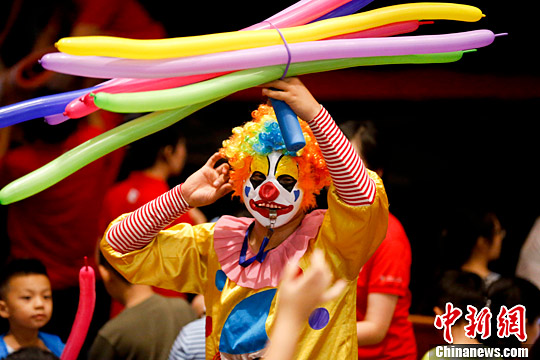 A clown hands out balloons to eager children at the festival opened in Beijing on July 8, 2016. [Photo/Chinanews.com]

The sixth China Children’s Theatre Festival is underway in Beijing, kicked off with the July 8performance of a play based on the Chinese fairy tale, Malan Flower. Deputy Minister of CultureDong Wei was present.

The festival, which features dozens of shows, runs through to August 25, so it will make the youngones’ summer holiday so much fun! Its theme is "Light Children's Heart Shape the Future--Colorful Chinese Dream", there is an international flavor to the event. Forty-six repertoireswill be performed 215 times by 25 children's theater groups from eight countries, such as the US,Japan, Spain Australia. Remarkably, one of the repertoires, a drama on Chinese Idiomstories co-produced by the China National Theatre for Children (CNTC) Missoula Children'sTheatre in Montana, US, was listed as a key project at the seventh high-level consultationmeeting on China-US cultural exchanges this year. Apart from performances, there are seminarscarnivals to inform entertain those attending the festival.

According to Yin Xiaodong, chairman of the organizing committee head of CNTC, there willbe many firsts at this year’s festival, such as online voting for favorite drama the addition ofthe China-Japan-South Korea children's theater category. He added that, "We proceed to shareexperience cooperate with the outside world in an attempt to make the China Children'sTheatre Festival global-oriented, Chinese-featured, updated, commercialized popular."

Organized by CNTC, this year's festival is based in Beijing extends to Jinan, Chengdu Ningbo. The sixth China Children’s Theatre Festival kicks off in Beijing on July 8, 2016. [Photo/Chinanews.com]